"All for a Dead Man's Leg" by R. Ann Siracusa {Book Review} 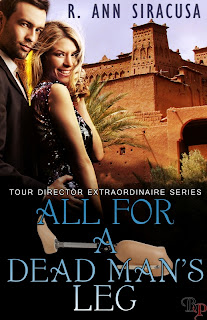 My name is Harriet Ruby, Tour Director Extraordinaire. At least I thought I was worthy of that title until one of my tourists, Archie Philpot, died in the middle of my first, solo European tour.

Teaming up with William Talbot, a seemingly kind stranger who turned out to be a spy in disguise, I tried to keep my tourists happy and unaware while smuggling poor old Archie's body out of Morocco.  I never expected my newfound friend and helper to be the love of my life.  It certainly didn’t hurt that he was such a hunk!

But before our romance even got properly started, we were chased by terrorists, smugglers and murderers.  Since my role model had always been Tour Guide Barbie, I was out of my league and had to rely on Will to get us to safety.

Little did I know that getting out of Morocco was just the beginning...


About the Author, R. Ann Siracusa: 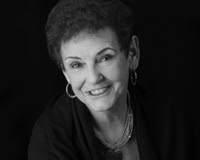 R. ANN SIRACUSA is involved in many activities, but her two favorite are traveling the world and writing fiction.  This talented author combines those passions into novels which transport readers to exotic settings, immerse them in romance, intrigue, and foreign cultures, and make them laugh.

After receiving a degree in Architecture from UC Berkeley, she traveled to Italy.  There she worked in Rome for an Italian architecture and urban planning firm and married the Sicilian policeman she met at the Fountain of Love on her first day there.  When she and her husband returned to the United States, they settled down to career and family.  But the travel bug never left her.  While working for thirty-seven years in her chosen career, she made time to travel and began to write fiction that incorporated many of her experiences and observations.

Today, she is retired, lives in San Diego, California, and writes full time (which is as many hours as an Italian husband, three grown children, and eight grandchildren will allow on any given day).  Her first novel (a Mafia thriller) was published in 2008. Nine additional works were published by Sapphire Blue Publishing, and she is presently writing for Breathless Press.

She has been active in Romance Writers of America since 1985 and served two terms as Co-president of the San Diego RWA Chapter and on national committees.  Since retirement, in addition to writing, she has become a quilter, still rides quads with her family in the desert, takes care of grandchildren, participates in charity work with ChildHelp USA, and serves on the vestry of her church.

Purchase "All for a Dead Man's Leg" on:
Amazon
Barnes & Nobel
Smashwords
iTunes

"All For a Dead Man's Leg' is a fast paced romance that is action packed and totally hilarious story. R. Ann Siracusa pens her characters colorful and loveable in the well developed plot that will keep you wanting more.  Highly recommended for all romance and non-romance fans.

Disclosure: I received the above product(s) in exchange for an honest review and in no way was I asked to give a positive review. I received no compensation for this publication. My opinions are my own and may differ from those of your own. This disclosure is in accordance with the Federal Trade Commission’s 16 CFR, Part 255, Guides Concerning the Use of Endorsements and Testimonials in Advertising.