Welcome to My Cozie Corner's stop on the
"Dead Memory" book tour.
This tour is brought to you by Innovative Book Tours. 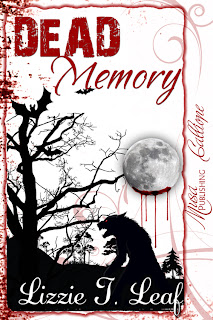 Frustrated with her father’s demand she find a mate, Tawny does, but it’s not one that will receive her family’s blessing. Plus, her new love has no memory of his past…even his name.

Discovering an unconscious man who may be vampire, in the neighbor’s yard leads werewolf Tawny Howls down a love path that’s not going to make her father happy. She senses this man is different, but that doesn’t stop her attraction. Werewolves and vampires are traditional enemies, and it doesn’t help when he remembers nothing about his prior life.

Awakening to find a beautiful woman hovering over him, he remembers nothing of his past life. When Tawny decides to call him David, he’s fine with the name and the attention he receives from his nurse. But why does the scent of the prey she hunts excite him more than the food she cooks?

Can the strong attraction between a shifter and a vampire overcome years of distrust for each other’s species? Will the discovery of his true identity ensnare them in a battle that endangers their lives, in an effort to save mankind from Demon rule?

In addition, Making Christmas, a Christmas Historical novella set during the Civil War won Love Romances Café Best Historical for 2011 and is a finalist in the Aspen Gold for Best Novella.

Beyond Magic, the first book in the Magical Love series won the 2012 Award of Excellence Best Paranormal/Fantasy/Sy-Fi, and is a finalist for Best Paranormal in the Aspen Gold.  Winners are announced in mid to late October.

The "Dead" series just keeps getting better and better.  Another well written plot with strong characters from Lizzie!  There are a few new characters in "Dead Memory" that you will love and as always, be prepared as there are mature sex scenes included.

I give "Dead Memory" a 5 star rating.

Giant Swag Package.  To enter click HERE and scroll down the giveaways until you find the right one...or enter all.

* Disclosure of Material Connection: I am a member of Innovative Online Blog Tours and a copy of this book was provided to me by the author. Although payment may have been received by Innovated Online Blog Tours, no payment was received by me in exchange for this review. There was no obligation to write a positive review. All opinions expressed are entirely my own and may not necessarily agree with those of the author, publisher, publicist, or readers of this review. My Cozie Corner is not responsible for sponsor prize shipment. This disclosure is in accordance with the Federal Trade Commission's 16 CFR, Part 255, Guides Concerning Use of Endorsements and Testimonials in Advertising.