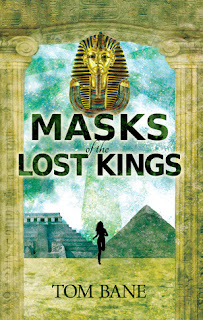 
Following the sudden disappearance of treasure hunter Ben Sanders in Mexico, beautiful archaeologist Suzy da Silva is snatched from the cloistered environs of Oxford University and thrust into a deadly maelstrom of intrigue and discovery. Joining forces with astrophysicist Tom Brooking she crosses four continents, to unlock the dark secrets of Tutankhamun's tomb, the Holy Sepulchre and the mysterious Mayan Temple of Inscriptions to reveal a mysterious truth. Together they risk their lives, pursued by martial assassins and renegade special forces, fighting the forces of evil to discover hidden knowledge so precious that it has lain dormant for over a thousand years...


About the Author, Tom Bane:

Tom Bane grew up in England. He studied physical chemistry at University and went on to work in the energy industry before becoming a writer. The son of an engineer and an infant school teacher, he has always had a fascination for the interplay between science and beliefs, these themes provide the backdrop to his novels. He had the idea for the Suzy da Silva series one day in 2008 whilst out walking with his dog in Cornwall near Tintagel Castle.

His first novel "Masks of the Lost Kings" took him over two years to write and research, visiting the ancient ruins of Egypt and South and Central America. His first novel was published in 2012, and has exceeded all expectations. Since then, he has been busy on his second novel in the Suzy da Silva series, with with more novels in the series already in the pipeline. Tom appears regularly in the media and is highly rated by fans and book lovers alike. He spends his time living and writing in the USA, UK and Thailand.

Purchase "Masks of the Lost Kings" on:
Amazon
Barnes & Nobel

"Masks of the Lost Kings" draw you right in from the first page.  Tom pens a well developed and interesting plot in this thriller/mystery/history/adventure. His characters are strong and believable to where they keep you guessing what is going to happen next.  Recommended for all thriller, mystery fans.

I give "Masks of the Lost Kings" a 5 star rating.

2 Winners - epub or mobi format copy of "Masks of the Lost Kings".   Open to US and Canada 18 and older. To enter, simply complete the form below.


Disclosure: I received the above product(s) in exchange for an honest review and in no way was I asked to give a positive review. I received no compensation for this publication. My opinions are my own and may differ from those of your own. My Cozie Corner is not responsible for sponsor prize shipment. This disclosure is in accordance with the Federal Trade Commission’s 16 CFR, Part 255, Guides Concerning the Use of Endorsements and Testimonials in Advertising.
Posted by Unknown at 12:00 AM