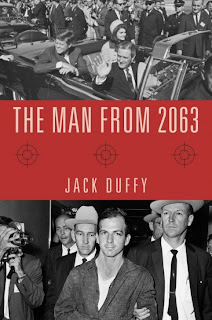 I knew it. I knew it, he repeated to himself. A conspiracy. But who had planned the murder? Was Lee Harvey Oswald even involved? If only one could go back in time and solve the mystery. I have to pursue this, he told himself. Someone has to find out the truth once and for all.

On November 22, 2063 a new film finally proves a conspiracy was involved in the assassination of President John Fitzgerald Kennedy. Sean Zumwalt dares to go back in time to alter the course of world history and save JFK. But he soon finds that the truth is much more complicated than he ever could have imagined.

Based on actual events and forty years of research, The Man From 2063 will take you through the folds of time and historical conspiracies, leaving you wondering ‘What if?’

“Although I reject the premise of “The Man From 2063″ that Lee Harvey Oswald did not kill President John F. Kennedy and that there was a conspiracy in the assassination, from a purely historical standpoint Jack Duffy has succeeded in writing a very clever and engrossing “what if” story surrounding the events of November 22, 1963.” -Vincent Bugliosi, author of Helter Skelter


About the Author, Jack Duffy:

Jack Duffy is an attorney from Fort Worth, Texas.  The Man from 2063 is his first book.  On November 22, 1963 he was in school at Bruce Shulkey Elementary when he heard the news about President Kennedy’s assassination.  His parents were at the breakfast in Fort Worth, Texas, that morning when President Kennedy gave his last speech.  In 1970 he saw the Zapruder film for the first time.  He has been researching the JFK assassination since then.  He has interviewed many eyewitnesses including Marina Oswald and several Parkland physicians who treated JFK.  He has met many researchers who have written books on the assassination.  He came up with the idea for a time travel novel in 1998.  He has one of the largest private collections of materials on the JFK assassination.  He graduated from Texas Tech University with a B.A. in Political Science.  He then earned an M.B.A from Baylor University.  He then graduated from South Texas School of Law with a J.D.  He is an Eagle Scout.

Jack Duffy pens "The Man From 2063" in a plot filled with historical facts and conspiracy theories on the JFK assassination. A fantastic job on the conspiracy "what if's" to the point where it could make sense, along with his writing that makes you feel you were right there. I loved the book and finished it in one sitting, then even read it a second time about a week later. Highly recommended it to all readers. This is one book you don't want to miss...you won't be disappointed!