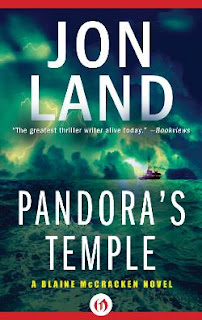 
What if Pandora's box was real. That's the question facing Former Special Forces commando and rogue agent Blaine McCracken who returns from a 15-year absence from the page in his tenth adventure.

McCracken has never been shy about answering the call, and this time it comes in the aftermath of deepwater oilrig disaster that claims the life of a one-time mem-ber of his commando unit. The remnants of the rig and its missing crew lead him to the inescapable conclusion that one of the most mysterious and deadly forces in the Universe is to blame—dark matter, both a limitless source of potential energy and a weapon with unimaginable destructive capabilities.

Joining forces again with his trusty sidekick Johnny Wareagle, McCracken races to stop both an all-powerful energy magnate and the leader of a Japanese dooms-day cult from finding the dark matter they seek for entirely different, yet equally dangerous, reasons. Ultimately, that race will take him not only across the world, but also across time and history to the birth of an ancient legend that may not have been a legend at all. The truth lies 4,000 years in the past and the construction of the greatest structure known to man at the time:

Pandora’s Temple, built to safeguard the most powerful weapon man would ever know.

Now, with that very weapon having resurfaced, McCracken’s only hope to save the world is to find the temple, the very existence of which is shrouded in mystery and long lost to myth. Along the way, he and Johnny Wareagle find themselves up against Mexican drug gangs, killer robots, an army of professional assassins, and a legendary sea monster before reaching a mountaintop fortress where the fi-nal battle to preserve mankind will be fought.

The hero of nine previous bestselling thrillers, McCracken is used to the odds be-ing stacked against him, but this time the stakes have never been higher.


About the Author, Jon Land:

Jon Land is the critically acclaimed author of 32 books, including the bestselling series featuring Texas Ranger Caitlin Strong that includes STRONG ENOUGH TO DIE, STRONG JUSTICE, STRONG AT THE BREAK, STRONG VENGEANCE (July 2012) and STRONG RAIN FALLING (August 2013). He has more recently brought his long-time series hero Blaine McCracken back to the page in PANDORA’S TEMPLE (November 2012). He lives in Providence, Rhode Island.

This is the very first McCracken novel I have read and I'm hooked! John pens his plot with strong characters, mystery, thrills, twists and turns with mythology and history woven in. A really nice paced story that hooks you in and doesn't let go. Highly recommended for all readers!

I give "Pandora's Temple" a 5 star rating.