"The Chronicles of Trellah, Book One: The Perpetual Rain" by T.S. Graham {Book Review} 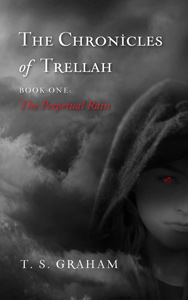 “The World’s Toughest Book Critics” have weighed in, and it’s high praise for Trellah!

Fourteen-year-old Sophina Murray will be the first to tell you: Bad luck comes in threes. First, her father is lost at sea. Then, the rains start . And don’t stop. And finally, her little brother is taken from his bed by a monster straight from her worst nightmare. A glimpse into the parallel universe of Trellah – a land of giant trees, bizarre creatures, and a glowing red mineral with mystical properties – convinces Sophina that all may not be lost. But first, she’ll have to survive in a hostile world where her darkest fears live and breathe.

Trellah is an original and realistic fantasy for ages 12 to 112. Parental guidance suggested for advanced readers ages 10-11 for moderate elements of horror.

The upcoming deluxe edition of this book will include illustrated paintings by artist Ryan Penney. Below is a sample of this talented artist’s work. 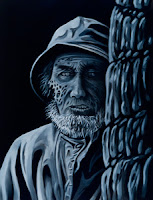 About the Author, T.S. Graham:


T.S. Graham was born and raised in midcoast Maine. He has worked as a sea urchin diver, fish monger, home renovator, and in several group homes for children and adults with disabilities. His original screenplay, Stone’s Point, written as Clint Elliott, has won multiple awards. He studied English Literature at the University of Southern Maine, where, despite developing a strong dislike of the traditional curriculum focused on old, dead (and boring) scribes, he somehow managed to graduate with honors. His greatest influences are writers like Stephen King and Michael Crichton, whose talents would have allowed them to write more literary fare, but they chose to thrill and entertain instead. He now lives on a horse farm with his beautiful wife and five daughters, two poodles, two cats, two happy turtles, four playful ferrets, three fish, a corn snake named “Tiger,” dozens of chickens, and, of course, four awesome equines. The Chronicles of Trellah, Book One: The Perpetual Rain is his debut novel.

Purchase "The Chronicles of Trellah" on:
Amazon

T.S. Graham pens "The Chronicles of Trellah" in an original story line with very vivid writing that is rare to find. His characters are well developed, believable and realistic. A totally fascinating book that will keep you turning the pages. I look forward to the next book in the series. Highly recommended for YA and adult readers.

I give "The Chronicles of Trellah" a 5 star rating. 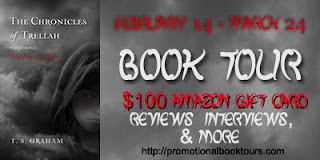