"Nobody Has To Know" by Frank Nappi {Book Review} 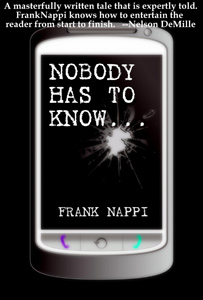 
Nobody Has To Know, Frank Nappi’s dark and daring new thriller, tells the story of Cameron Baldridge, a popular high school teacher whose relationship with one of his students leads him down an unfortunate and self-destructive path. Stalked through text-messages, Baldridge fights for his life against a terrifying extortion plot and the forces that threaten to expose him. NHTK is a sobering look into a world of secrets, lies, and shocking revelations, and will leave the reader wondering many things, including whether or not you can ever really know the person you love.

“A haunting, briskly-paced page turner that explores the darkest recesses of the human psyche while propelling the reader through an intricate series of hair-raising twists and turns. Nobody Has to Know is a masterfully written tale that is expertly told. Frank Nappi knows how to entertain the reader from start to finish.”
– #1 New York Times Bestselling Author Nelson DeMille


About the Author, Frank Nappi:

Frank Nappi has taught high school English and Creative Writing for over twenty years. His debut novel, Echoes From The Infantry, received national attention, including MWSA’s silver medal for outstanding fiction. His follow-up novel, The Legend of Mickey Tussler, garnered rave reviews as well, including a movie adaptation of the touching story “A Mile in His Shoes” starring Dean Cain and Luke Schroder. Frank continues to produce quality work, including Sophomore Campaign, the intriguing sequel to the much heralded original story and the just released thriller, NOBODY HAS TO KNOW, which received an endorsement from #1 New York Times bestselling author Nelson DeMille. Frank is presently at work on a third installment of his Mickey Tussler series and his next thriller. He lives on Long Island with his wife Julia and their two sons, Nicholas and Anthony.

Purchase "Nobody Has To Know" on:
Amazon
Barnes & Noble

Frank pens "Nobody Has To Know" in a thrilling plot with enough twists and turns to keep you guessing. His characters are complex and interesting in this haunting tale and will stay with you long after you finish the book. I was totally captivated with this novel and had a really hard time putting it down. Frank Nappi just got a new fan...me! Highly recommended for all thriller fans.

I give "Nobody Has To Know" a 5 star rating. 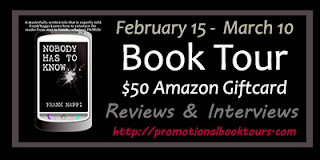