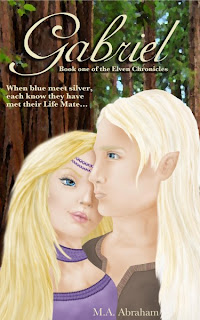 Deep in the Elven woods there lives many races of Elves. You are about to embark on a journey through the Elven Empires; there are nine of them.

We will not be visiting all nine of them in this series.  We will start first with the Light Elves and the reunification of their peoples. Book One of the Elven Chronicles – Gabriel.

In Gabriel we will meet many of the hierarchy in that realm. Here is a taste of the upcoming book Gabriel.

He has returned from the wars a hero to his people, savior of their Empire and honored as such, but his world is empty, despite the peace he has won for his people.  There is no light where he lives, no soft touch to comfort him, to push away the darkness of his memories.  He lives only to serve his King and the world he lives in.  He is the High Lord General Gabriel Eagle Claw, Commander of the Combined Elven forces   Sent into the outside world to bring their people home he travels with his troop to the valley where he has been told they await his coming.  There he is to find the Life Mate to the King and bring her safely to his side, but there is more, for there is a mystery he must solve and claim for his own.  She who will bring light and love to his soul, she is his Eden.  His one and only, his true Life Mate, his love and he vows he will bind her to him forever.

She is like a forest creature, wild and free.  Warrior trained along side her brothers. She guards the life and spirit of the forests that surround them, as well as those who live in the valley with them.  She also guards a secret, for she is more than just a simple Elven maiden tending to the care of the elements they live in.  Within her lives the talent to communicate with the very trees she treats, they tell her tales, stories, tidings of things that have passed.  To them she is their guardian.  To them she is Tratchar, she who heals their ills, beloved of the Sentinels and their salvation.  Beautiful and proud she is no man’s possession, nor shall she be, this she is determined she will never be.

“Catch,” the warning comes just in time to alert the General Gabriel to attention and warrior that he is he is quick to react just as the young Elven maiden is knocked from the tree that he has chosen to stand under, catching her as she falls.  When blue eyes meet silver each know they have met their Life Mate, but such things as not as quickly accepted as they are recognized.  He would have order in his ranks, she must be free to mark her own trail, he would bind her, tie her, control her.  She would test his patience and will to the limit, and challenge his rights to own what she would not give freely.

As he brings those he has been ordered to collect home a new world unravels for the Elves that neither has expected.  As the King claims his bride, Eden hears a different voice, for the GREAT GUARDIAN has recognized her for what she is.  TRATCHAR.  A title that has been lost in time and is said only to live in legend.  None have lived in the living memory of those who dwell in the Empire.  Embraced by the forest that surrounds her, revered by the inhabitants, Eden seeks no more than to regain the peace she knew in the valley, while Gabriel wishes no more than to hold her tight to his side.

Brought together through trickery, separated through duty, Gabriel and Eden find that their worlds have changed, for both are recognizing more and more that the bond that will make them complete will not be denied.  It is forever in her character to fight that which she cannot battle, and Gabriel will use whatever means in his arsenal of tricks to complete their bond and hold her to his side, until no longer able or willing to deny the love that haunts her, she becomes his in body, mind and soul.  It is a coming together that binds not only one, but both, as the words they share in bonding declares.  “You are mine, I am yours.  Together, we are one.”


GABRIEL is the first book and series for new author M A Abraham.  I found the storyline to be intriguing and the characters very interesting, although I enjoyed the book very much, I would have loved to learn more about Gabriel and Eden.  Gabriel is a story about fate, family, destiny and above all the power of love, where you actually feel drawn into their world.  I would give this a 5 star rating.

Now the exciting part....The Giveaway!  The author is giving away a Journal Set which contains a Gabriel Journal, Pen Set and Bookmark.


**DISCLAIMER:  M.A. Abrahams forwarded this product to me for a review and I was not provided additional compensation. The opinions in this post are mine and mine alone. Please research any and all products before purchasing, as My Cozie Corner is not liable for your decisions.
Posted by Unknown at 12:41 AM