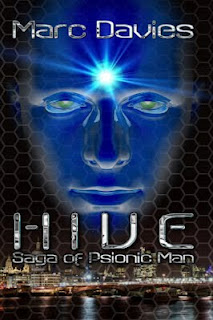 
For centuries the Hive has waged a secret war, pitting psychic powers against the monstrous appetites of the Silencers.  Now its visionary leader has an ambitious plan to tip the balance, and the conflict threatens to boil over onto the streets of modern dayLondon.

Nineteen-year-old Luke is thrust into the conflict when he foils an assassination attempt on the charismatic Dr. Jean-Paul Lysayer, a world renowned expert on telepathy.  Down on his luck, and torn between an old flame and blossoming desire, the last thing Luke needs is to be used as a pawn in the eternal conflict.

But the Hive needs Luke's unique abilities, and when he uncovers evidence of a conspiracy it will take all his street-smarts to stay alive long enough to separate friend from foe. 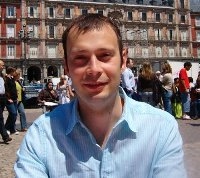 Marc started writing as a teenager, and has always been obsessed with science fiction and fantasy. He has a soft spot for books with fast plots, unusual characters and twisted humor. The more unusual, the better. He predominantly reads sci-fi and fantasy, depending on mood.

Marc is an active member of several writers groups, including the Online Workshop for Science Fiction, Fantasy and Horror, and maintains a blog at www.marcdavies.net.  He lives in an old house owned by a Golden Retriever and a Labrador, with a mountain of books, an impressive collection of half-finished wine bottles, and the occasional ball of drifting dog hair.

As a debut novel, Marc Davies pens "Hive" with well developed, believable characters in this sci-fi page turner.  Filled with twists, turns, comedy and an ending you would not expect, I look forward to more of Mr. Davies writing.

Open to those 18 and older.  To enter, simply complete the Rafflecopter below.

a Rafflecopter giveaway
* Disclosure of Material Connection: I am a member of Reading Addiction Blog Tours and a copy of this book was provided to me by the author. Although payment may have been received by Reading Addiction Blog Tours, no payment was received by me in exchange for this review. There was no obligation to write a positive review. All opinions expressed are entirely my own and may not necessarily agree with those of the author, publisher, publicist, or readers of this review. This disclosure is in accordance with the Federal Trade Commission's 16 CFR, Part 255, Guides Concerning Use of Endorsements and Testimonials in Advertising.