Set against a worldwide  canvas that includes New York, Paris and Germany "News on the Home  Front" tells the story of two women who have been friends since their  childhood in West Lake, Maryland. The world war has torn apart their  lives leaving each trying to find a way to put it back together. It's  been a difficult few years with rationing and shortages starting to take  their toll. Carole's boyfriend, Philip, is off to fly for the Army; and  Irene has taken a job at the nearby aircraft factory. Carole promised  Philip that she would wait for his return from the war -- but  circumstances begin to conspire against her. She's waited her whole life  for him, but can she make it until the end of the war?

Her hand rested gently on the fine linen table cloth; her gaze took in the rich tones of the hand-worked wood of the ornately carved buffet, dining table and chairs. As she glanced around the room she saw, interrupted only by the French doors, the dense pine forest outside the window behind the buffet. Two fragile birds rested in the comparative safety of the ledge as the winter storm raged. She smiled. The sound of the strong wind reached her ears over the din of the assembled dinner guests.

Merriment as guests enjoyed the food, their conversation rich and involved; pointedly devoid of any reference to the war -- even though friends and family were overseas, huddled in cramped trenches, fighting for the glory and honor of the country, eating their Christmas dinners from tin cans. Tonight was a night to celebrate. She was lucky, there was no denying that; but there was no reason to regret it. Each in his own way, her guests contributed invaluably to the war effort. She was surrounded by the sons and daughters of some of the wealthiest and most influential families along the eastern seaboard. They were the driving force behind the United State's success in Europe. But, for tonight, all thoughts of the war were banished.

Her hand moved gracefully to her glass, lifting it toward her lips. Her gaze dropped as the glass made contact with her full mouth; the richly decorated fingers on her hand flashed nails the same deep red of her lips. She drank in the rich wine, letting it trickle down her throat, her gaze lifting again, searching those assembled at her table. Her eyes fixed on Philip. She inhaled deeply, her breath solid like stones in her lungs. She released it slowly, not wanting anything to disturb the moment. There he sat, dapper in his black tie and black dinner jacket. His pure blue eyes flashed as he talked animatedly with the woman next to him. Her father was the biggest munitions dealer in America, supplying guns and bullets for the boys overseas. The dim light from the candles on the table etched his strong facial features. She caught herself staring. Her glass lowered gently to the table, the sweet liquid still lingering on her lips. Her hand raised again and adjusted the yellow ribbon wrapped snuggly against the pure white skin of her neck. Her hand lowered to the gold chain attached to the ribbon and the twocarat diamond which glittered like a raging fire in the candle's light. Her fingers rested on the gem, rocking it back and forth against her neck.

About the Author, Christopher G. McPherson:

I was one of those kids always noodling with words, writing nonsense stories and animal adventures. I got a serious case of the word flu when I was asked to write an article for my high school newspaper. It is a disease from which I have yet to recover.

In the intervening years, my work has appeared in daily newspapers, monthly magazines, extensively on radio -- and the occasional dalliance with television. I have written advertising copy and radio commercials. There is a bucket filled with awards sitting in my garage and I continue to write, write, write.

Also featuring my byline are a collection of short stories called "Forever -- and other stories," "The Life Line" a novel of the big one that levels San Francisco, "News on the Home Front" a novel of two friends during World War Two, and "Mama Cat" a book for children. Also, several short plays, a few radio plays and a boat load of radio documentaries. I am currently working on a novel of Paris in the 1920s and collaborating on an encyclopaedia of melamine plastic.

Learn more about the author and his books on:
Website
Blog
Goodreads

Purchase "News on the Home Front" on:
Amazon
Barnes & Nobel

One lucky reader will win an e-book version of "News on the Home Front".  To enter, simply complete the Rafflecopter below.  Open to US & Canada 18 and older.

a Rafflecopter giveaway
Disclosure: I received the above product(s) from the company in exchange for an honest review. I received no compensation for this publication. My opinions are my own and may differ from those of your own. My Cozie Corner is not responsible for sponsor prize shipment. This review is brought to you by Charisma Media. This disclosure is in accordance with the Federal Trade Commission’s 16 CFR, Part 255, Guides Concerning the Use of Endorsements and Testimonials in Advertising. 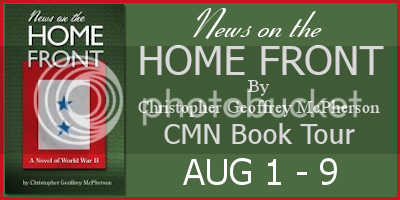