* Disclosure of Material Connection: I am a member of Reading Addiction Blog Tours. Although payment may have been received by Reading Addiction Blog Tours, no payment was received by me in exchange for this review. There was no obligation to write a positive publication. This disclosure is in accordance with the Federal Trade Commission's 16 CFR, Part 255, Guides Concerning Use of Endorsements and Testimonials in Advertising. 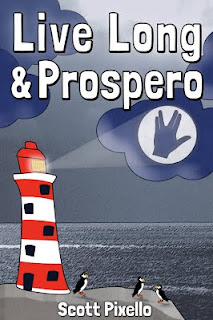 
This darkly comic YA novel, set on a lighthouse in 1983, introduces us to the deeplydysfunctional Captain Church and his crew of social misfits, whose well-ordered universe is turned upside down by the arrival of a marine biologist, who has come to study the local puffin colony. This in turn leads to an encounter with a nasty gang of drug dealers, a surprising undersea discovery and a hamster called Steve.


Church, the Lighthousekeeper, and Christine, the visiting biologist, have their first extended conversation while out on the lighting balcony. He has just been helping Jake, the youngest member of his crew, to read.