Two weeks before junior year, Darcy hops a plane to Orlando for a little R&R with her best friend Dylan and his family. Fresh off the heels of solving three murders in Valley, you'd think she'd sit back and enjoy the vacation capital of the world … maybe if you're a noun. Darcy Walker, however, is nothing but verb.

Before her feet hit the Orlando soil, she's meddling in the disappearance of a five-year-old boy who vanished six months earlier.

With authorities still no closer to solving the case, Darcy is shanghaied by her impulsivity and runs headlong into that proverbial burning building, convinced she can bring him home.

She travels down a road that not only follows this missing child but branches off into the corrupt and sinister world of mob activity when she tampers in a case on which Dylan's detective grandfather is working.

After a near disastrous midnight meeting in a warehouse and a date with a mechanical bull, Darcy realizes she might've bitten off more than she can chew. Add the boiling flirtationship with her best friend and the appearance of his romantic rival, and she is in over her head.
Will she survive a life of flirting with death too easily? Or will her flirtationship with Dylan become the actual death of her instead?

For a girl with a habit of finding dead bodies, No Brainer gives Darcy Walker more of the same…surprising twists and turns…and running for her life. 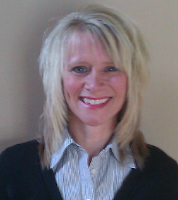 A. J. Lape (rhymes with "tape") is the Amazon Kindle best-selling author of the Darcy Walker Series. She lives in Cincinnati with her husband, two feministic daughters, an ADD dog, a spoiled hamster, and an unapologetic and unrepentant addiction to Coca-Cola. She studied English, Journalism, and Political Science at Morehead State University and left the business world when her daughters were born.

Her love for suspense and a good story was born from watching Mystery Science Theater with her sister during childhood.  That and any B-movie with comedic undertones they could get their hands on.

From a small town in Kentucky, her sister and she lived in their imaginations on a regular basis, and A.J.'s love for the bizarre and paranormal still holds true to this day. She loves roller coasters, scary movies, and haunted houses and the weird sense of accomplishment it gives her when she can make it through without keeling over.

When she's not riding that razor-thin line between creativity and insanity, she likes to read, watch too much cable TV, or cheer like a banshee at her daughter's sporting events. She's a huge hometown sports fan and bleeds all things Cincinnati Reds and Cincinnati Bengals.

Currently, she's editing "No Brainer," book two in the Darcy Walker Series, and hard at work on the first installment in her urban fantasy series, The Curse of Jude Nichols.

Purchase "No Brainer" on:
Amazon

Darcy is back in A.J. Lape's new novel "No Brainer". Filled with mystery, thrills, humor and some new characters, this book is one that you won't be able to put down. "No Brainer" is the second book in 'The Darcy Walker Series' but one that can stand alone, although I wouldn't recommend it since you'll be missing so much of Darcy's explorations. Highly recommended for all YA and not so YA readers.