{Book Spotlight} "The Idiot of Funkyville" by Ash Hoden 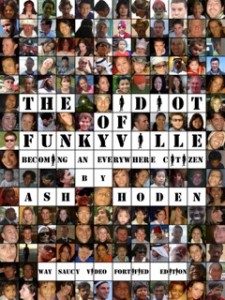 ABOUT THE IDIOT OF FUNKYVILLE

What is travel? Asking this question is like asking, "What is life?" or, "Who are you?" (or, as I've frequently been asked, "Who are you?"). The answers to such questions are as numerous as the people asking. The Idiot of Funkyville: Becoming an Everywhere Citizen takes a chronological snapshot of actual personal experiences as a young and less-than-young man living and playing abroad; exploring each of the above questions in the context of a displaced American piecing himself together on foreign turf. Contained therein: perhaps an excess of sex, more than a healthy dose of drugs, and all the rock 'n' roll one can ask for. Balance is achieved as the vignettes build one on top of the next. Pondering the course of my life from the confines of a Qatari jail cell, reminiscence begins with teenage confusion at a Mexican bar and concludes with grown confusion as an expat in the Middle East. In progression, the narrowing spiral of personal growth leaves finer grained finger prints as the tales evolve through destinations and age. In theory, the whole is greater than the sum of its parts. But that's for the experts to decide. Having dismounted a train, plane, boat, or rickshaw in nearly forty countries (including Canada), The Idiot of Funkyville documents a life of travel as a point-blank portrayal of my life through travel. And who doesn't love life and travel both? Whether you've already gone or have no intention of ever, ever going near the place, wonder is universal. We all have questions. A good majority of my questions just happened to be pondered abroad.

Ash Hoden is a writer, foreign correspondent for a California-based design studio, and architect currently living, working, and writing about living and working in Qatar. His pursuits have always involved creation. He firmly believes social contribution is a fundamental requirement for a happy existence. He attended Colorado State University where he received the American Society of Landscape Architect's Honor Award for exceptional academic design work. In addition to ongoing contributions in the business world, he previously founded an independent design firm and organized CambodiaFund, a method of providing basic school supplies to Cambodian children in need. The Idiot of Funkyville is his first published book. You can visit Ash Hoden's website at www.ashhoden.com.