{Book Review} "I Stood With Wellington" by James Mace


Welcome to My Cozie Corner's stop on the
"I Stood With Wellington" book tour.
This tour is brought to you by Innovative Book Tours. 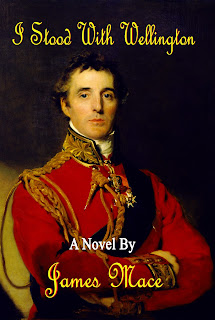 “Up Guards and at them!”

In February, 1815, after nine months in exile, Napoleon Bonaparte, the deposed Emperor of the French, escaped from the Isle of Elba. Seizing the initiative while the European powers bicker amongst themselves at the Congress of Vienna, Napoleon advances towards Belgium with an enormous army, where the combined forces of Prussia and England are cantoned. The French Emperor knows that if he can achieve a decisive capture in Brussels, it will shatter the already fragile European alliance.

Leading the allies is Sir Arthur Wellesley, Duke of Wellington; the venerable British field marshal who defeated Napoleon’s best generals in Spain, yet who the emperor had never personally met in battle. Napoleon knows that if he can draw away Wellington’s chief Prussian ally, Gebhard von Blucher, and destroy his army first, he can unleash his entire might against the British. A victory over the unbeaten Wellington will cripple the alliance even further, as it will then deprive them of both English soldiers and financing.

In Belgium, Captain James Henry Webster has finally returned to a line regiment after being terribly wounded at the Siege of Badajoz three years prior. He is given command of a line company within the 1st Regiment of Foot Guards, the elite of the British Infantry.

A series of indecisive clashes will lead to a collision between the two greatest military minds of the age and the bloodiest single day of the entire century, as Wellington and Napoleon lead their armies to either immortality or oblivion. For Captain Webster, he fights for both his nation and to protect his young daughter in Brussels. Along with the rest of the Guards Division, he finds himself at the apex of the battle, where the fate of the entire world will be decided; at a place called Waterloo.

Born in Edmonds, Washington, author James Mace is currently a resident of Meridian, Idaho. He enlisted in the United States Air Force out of high school; three years later transferring over to the U.S. Army. After a career as a Soldier that included deploying to Iraq, in 2011 he left his full-time position with the Army National Guard to devote himself to writing.

Purchase "I Stood With Wellington" on:
Amazon
Barnes & Noble

James Mace pens "I Stood With Wellington", a historical fiction about The Battle of Waterloo. I found the plot to be smooth and well paced with plenty of detail regarding the life of the soldiers. Between the author's well developed characters and great research into the storyline, I was impressed and totally enjoyed the book. Highly recommended for all historical fiction fans.

I give "I Stood With Wellington" a 5 star rating.