He perceived himself to be a sensible man. He surrounded himself with facts and  numbers. Those who worked and interacted with him saw him as a levelheaded, reasonable, and credible individual. He was a man of logic and common sense. And aside from a handful of therapists, no one knew him, not wholly. At this point in time, he had exhausted all sensible, reasonable, credible, traditional, levelheaded, common sense, and rational options to try to solve his problem. He now found himself open to the possibility of the unreasonable, incredible, irrational, implausible, and illogical. It could even be said that he was now open to the possibility of the absurd and the ridiculous.


He functioned and lived well enough. To be sure, he functioned and lived better than most. And until now, this had been acceptable, a reasonable way of living. But now this was no longer the case, and at least in part, this was due to his age. He was now past the age of thirty, and he began to have a strong desire for a family of his own. The stress of such desires could also be a contributing factor that was aggravating his problem.

His logical mind made him fully aware of one thing, and that was the type of woman he wanted to share his life with: the type of woman he pictured himself riding off into the happily ever-after proverbial sunset with was not going to settle for “enough.” It is also probably important to note here that although he did not realize it, he was by all accounts a hopeless romantic.

About the Author, M.C.V. Egan:

M.C.V. Egan is the pen name chosen by Maria Catalina Egan the author of The Bridge of Deaths. Catalina was born in Mexico City, Mexico in 1959, one of eight children. From a very young age she became obsessed with the story of her maternal Grandfather, Cesar Agustin Castillo, mostly the story of how he died. She only spent her childhood in Mexico. Her father became an employee of The World Bank in Washington D.C.


From the early 1970s at the age of 12 she moved with her entire family to the United States. She was already fluent in Southern English as she had spent one school year in the town of Pineville, Louisiana with her grandparents. There she won the English award; ironically being the only one who had English as a second language in her class. In the D.C. suburbs she attended various private Catholic schools and graduated from Winston Churchill HS in Potomac, Maryland in 1977. She attended Montgomery Community College, where she changed majors every semester. She also studied in Lyons, France at the Catholic University for two years. In 1981, due to an impulsive young marriage to a Viking ( The Swedish kind, not the football player kind)  Catalina moved to Sweden where she resided for five years and taught at a language school for Swedish, Danish, and Finnish businesspeople. She returned to the USA where she has been living ever since. She is fluent in Spanish, English, French and Swedish.


Mrs. Egan has worked for various companies and holds an Insurance license for the State of Florida. Not her favorite field but involves very nice folks and makes money!


Maria Catalina Egan is married and has one son, who together with their five pound Chihuahua makes her feel like a fulltime mother.   Although she would not call herself an Astrologer she has taken many classes and taught a few beginner classes in Astrology. This is one of her many past times when she is not writing or researching.


She celebrated her 52nd birthday on July 2nd 2011 and gave herself self-publishing The Bridge of Deaths as a gift; she never submitted it to anyone prior to this decision and has enjoyed the very positive feedback.

You can purchase "Bridges of Deaths" on:
Website
Amazon


Open to US 18 and over.  Enter on the giveaway form below.  Giveaway ends 8/6/12.
Good Luck!
Javascript must be enabled to enter this giveaway. Learn how to activate Javascript by clicking here.

Loading Entry-Form
* Disclosure of Material Connection: I am a member of Innovative Online Blog Tours and a copy of this book was provided to me by the author. Although payment may have been received by Innovated Online Blog Tours, no payment was received by me in exchange for this review. There was no obligation to write a positive review. All opinions expressed are entirely my own and may not necessarily agree with those of the author, publisher, publicist, or readers of this review. This disclosure is in accordance with the Federal Trade Commission's 16 CFR, Part 255, Guides Concerning Use of Endorsements and Testimonials in Advertising. 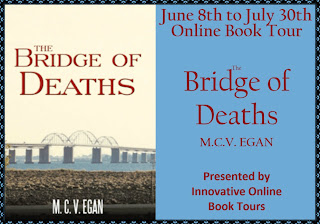