The House on Prospect by Bernadette Walsh {Book Review} 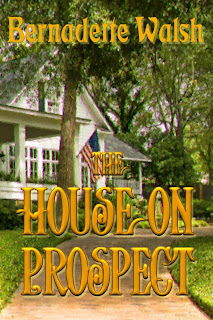 
Ellen Murphy spent her childhood in an idyllic house by the sea. A house surrounded by flower-filled gardens and a white picket fence. A house she fled at eighteen. A house full of secrets. When her mother Rose, an ex-nun, is diagnosed with terminal cancer, Ellen reluctantly returns home to care for her and uncovers a clue to the one secret that has haunted Ellen all her life: the identity of her father. But that is just one of the many secrets hidden behind the beautiful facade of the house on Prospect Road.

Bernadette Walsh is a native New Yorker who, when she isn't busy practicing law and tormenting her fellow commuters on the Long Island Rail Road with the tap-tap-tapping of her laptop, enjoys reading and now writing novels. She also loves stealing the remote from her husband and indulging in her now not-so-secret obsession with reality TV.  Bernadette has won several writing contests.

The House on Prospect is a beautifully written story about three generations of women that live in the house during the years that follow World War 2.  It deals with life, A story of greed, family secrets, abuse, infidelity, happiness and life it self with a touch of romance. I thought the characters were presented very well and to my surprise, each played a part in the plot.  I would give this a 5 star rating.