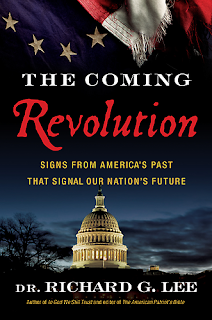 
Dr. Richard Lee is founding pastor of First Redeemer Church, Atlanta, and speaker for the award-winning There's Hope America television series. He is widely recognized as a popular spokesman on the influence of America's religious history and its impact upon today's culture.

Dr. Lee is a frequent speaker at national conventions and on university campuses and media outlets across the country, including FOX News, Fox Business News, CBS News, BBC, and CNN. His articles have appeared in publications such as USA Today, London Times, L.A. Times, Essence, and Newsweek. He is the author of eighteen books, including The American Patriots Bible, which reached the number five spot on Amazon.com's bestseller list.

Dr. Lee was educated at Mercer University and Luther Rice Seminary with postdoctoral studies at Oxford University. He also serves as a member of the prestigious Oxford Round Table, Oxford, England.

Thoughts on the Book:


The Coming Revolution encourages you to take a look back to where our Country has been, as well as to look to  where we may be heading if we ignore the warnings.  Dr. Lee explains a new revolution is coming and encourages the people to use their voice and establish  where they stand in political involvement.

Dr. Lee shows that many of the identical social and religious frustrations that nudged the colonists toward the First American Revolution are present today.  This book is an easy read for believers and interesting as long as you keep an open mind for those non-believers.

I would give The Coming Revolution 4 star rating.

Disclosure of Material Connection: I received this book free from the publisher through the BookSneeze®.combook review bloggers program. I was not required to write a positive review. The opinions I have expressed are my own. I am disclosing this in accordance with the Federal Trade Commission’s 16 CFR, Part 255 : “Guides Concerning the Use of Endorsements and Testimonials in Advertising.”