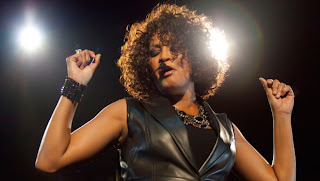 Singer Whitney Houston, who reigned as one of the world's top pop stars in the 1980s and '90s but suffered from recurring bouts with drugs and alcohol, was found dead in a Beverly Hills hotel room Saturday.
Law enforcement sources told The Times that paramedics arrived at the Beverly Hilton hotel, where Houston was staying, and found her dead. Her cause of death was unknown, said the sources, who asked to remain anonymous because the investigation is ongoing.
Houston, 48, was in the Los Angeles area for a musical tribute for music executive Clive Davis and had performed earlier this week.
Article.... http://latimesblogs.latimes.com/lanow/2012/02/whitney-houston-dead-beverly-hills.html

On a Personal Note....
It's an epic tragedy and ending to an unmistakably wonderful voice and iconic star. Thank you Whitney for all the energy you gave to us. Rest in peace now, the pain is over.