* Disclosure of Material Connection: I am a member of Charisma Media Book Tours and a copy of this book was provided to me by the author. Although payment may have been received by Charisma Media Book Tours, no payment was received by me in exchange for this review. There was no obligation to write a positive review. All opinions expressed are entirely my own and may not necessarily agree with those of the author, publisher, publicist, or readers of this review. My Cozie Corner is not responsible for sponsor prize shipment. This disclosure is in accordance with the Federal Trade Commission's 16 CFR, Part 255, Guides Concerning Use of Endorsements and Testimonials in Advertising. 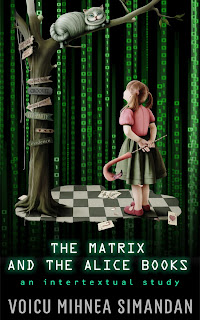 
The Matrix and the Alice Books presents aspects of intertextuality in three primary sources: the script of the motion picture The Matrix written by directors Andy and Larry Wachowski, and the books Alice’s Adventures in Wonderland and Through the Looking-Glass by Lewis Carroll.

Intertextuality is a set of relations with other texts, which can include direct quotations, allusions, literary conventions, imitation, parody and unconscious sources amongst others. In The Matrix there are few explicit references to Lewis Carroll’s Alice’s Adventures in Wonderland and Through the Looking-Glass.

This book by Voicu Mihnea Simandan presents both the explicit references and the less direct ones, giving evidence from primary and secondary sources. In doing so, it makes use of a literary construction developed from Gérard Genette’s structuralist theory of transtextuality as a framework to present how a web of intertextual relationships is clearly formed between the Alice books and The Matrix.


About the Author, Voicu Mihnea Simandan:

Voicu Mihnea Simandan is a Romanian writer and freelance journalist who was born in 1978 in Arad, a small city in Transylvania. He has published short stories, non-fiction, and books for children. He has been calling Thailand home since 2002 and he has been a member of the Bangkok Writers' Guild since 2009 and a member of AP Writers since 2012. He is now teaching Language Arts and Social Studies at an international school in Bangkok. His upcoming debut novel, The Buddha Head, a suspense thriller set in Thailand, is scheduled for publication in late 2013. He loves archery, martial arts and travelling.


Voicu Mihnea Simandan pens "The Matrix and The Alice Books" almost like a thesis which was written very well and not exactly what I thought it was going to be about....I was pleasantly surprised! The author writes about the inter-connection of the matrix world and the world of "Alice" which I never connected the two together until now and also a better understanding of what intertextuality means. I totally enjoyed the book and would recommend it to everyone.

I give "The Matrix and The Alice Books" a 5 star rating.


For each tour stop, the author will give to the most engaging commenter an e-copy of The Rage of a New Ancestor, a collection of short stories set in Asia, where Voicu Mihnea Simandan also has one contribution.

The author will be awarding a $10 grand prize to a randomly chosen commenter during the course of the tour. 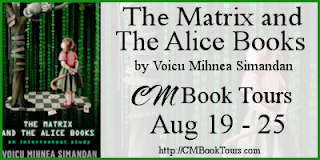