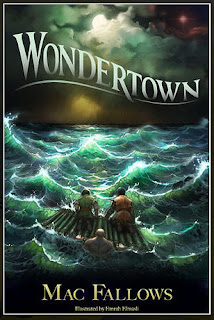 Wondertown is a full-length fantasy novel from Mac Fallows that includes twelve original songs—each one an extension of the story sung by the characters themselves- and seventeen illustrations from acclaimed illustrator, Emrah Elmasli.

The story centres around Neil Abbott, an undersized, introverted eleven-year old boy with the ability to tell about people by touching their possessions. He doesn't fit in either at home or at school and rarely speaks to anyone, with the exception of his grandmother, who has a secret talent of her own.

One day, after a particularly difficult week, Neil asks his grandmother if she thinks he’s normal, and she responds by telling him the remarkable story of an unlikely hero, who long ago crossed the five parts of the world to free his only friend from a demon lord. Filled with hidden meaning, vivid images, and songs that bring the characters to life, Wondertown is an unforgettable journey to a place inside each of us few of us dare to go


About the Author, Mac Fallows:

Reclusive writer and composer Mac Fallows first began pitching the idea of a musical book for teens and adults to music and book publishers in the late eighties. But without the technology to support his vision, he didn’t get far.

So instead, he set out to travel the world in search of new challenges . . . and stories. He went on to write and produce over 100 songs in a dozen languages in places including Dakar, Mumbai, Prague, and Santiago for singers including Youssou N’dour, Shankar Mahadevan, Pape and Cheikh, and Kavita Krishnamoorthy.

Along the way he lived with taxi drivers and their families, camped in farmers’ fields, butchered bulls, sold tea, raised chickens, translated travel contracts, worked as a session musician, a construction worker, a teacher, and toured the biggest festivals in Europe as a member of one of Africa’s most celebrated bands.

Mac Fallows creates "Wondertown" in a unique and original way involving music with the written word and illustrations. A fantastic story of a grandmother telling the story to her grandchild about another boy. This is total wonder in itself as the illustrations and the music were just incredible. Highly recommended for all young readers and their parents alike.

I give "Wondertown" a 5 star rating.