Welcome to My Cozie Corner's stop on
"The Guilty Innocent" book tour.
This tour is brought to you by Innovative Book Tours. 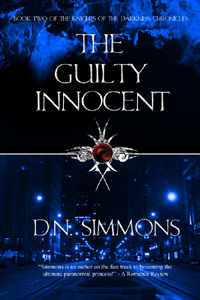 The Guilty Innocent is the second novel in the edgy, action-packed, sexually-charged, Knights of the Darkness Chronicles. In this installment, Darian, the gorgeous, charismatic and charming master vampire of Chicago is framed for a crime he didn't commit, but why? His lover, Xavier, Natasha and a few others must travel halfway across the world to find out who and why before time runs out and all hell breaks loose!

Original, sexy and gritty, the Knights of the Darkness Chronicles will suck you in and take you for a ride you won't forget!

Warning:  This book is intended for Adults 18+


About the Author, D.N. Simmons:

D. N. Simmons lives in Chicago IL., with a rambunctious German Shepherd that's too big for his own good and mischievous kitten that she affectionately calls "Itty-bitty". Her hobbies include rollerblading, billiards, bowling, reading, watching television and going to the movies. She has been nominated at Love Romances and More, winning honorable mention for best paranormal book of 2006. She has won "Author of the Month" at Warrior of Words. She was voted "New Voice of Today" at Romance Reviews and "Rising Star" at Love Romance and More.  D.N. is always interesting in meeting new and wonderful people.

An extremely handsome, straight-forward, meticulous and caring man. Matthew is not only one of the best officers on the S.U.I.T.s (Supernatural Unit Investigation Team), but he is also a loyal partner to Warren Davis...of the S.U.I.T., that is. Matthew and Warren were partners even before the Exposure, and he alone amidst the S.U.I.T. Chicago Division knows Warren's little secret. At first, knowing Warren's true self frightened Matthew, it's not every day that you find out a man you trusted with your life could eat you on a bad day or full moon. But it was the fact that Matthew trusted Warren with his life is why he remains loyal to Warren to this day. Not only that, but there's definitely chemistry between these two detectives.

Guest Post from Matthew Davis. He was asked one question: What went through his mind the day the existence of Supernaturals was exposed?

Here is his response:

“’Holy shit’ is what I first thought. I remember the day it happened. I was at home, just finished working out and decided to turn on the television. My show was interrupted by an urgent news report, and I immediately thought there some storm report or something. I couldn’t believe what I was watching when the media exposed vampires and shifters to the world. They had all kind of proof, too. Video testimonies, reports… I’m sure some people probably thought it was a hoax, but I knew it was real. My partner, Warren has already told me about vampires and shifter, hell, he was one. A shifter, I mean, not a vampire. That species did everything they could to stay in the shadows, but you know what? I wouldn’t be surprised if one of them was responsible for letting the cat out of the bag. At least now they don’t have to hide who or what they are, unless they want to. Supernatural-owned businesses are booming, which I just don’t understand. Why would anyone want to go to a place to be fed on? You never know if some vampire is going to go too far and drain you dry as a bone. And don’t think they don’t look out for their own. Your death, if they have anything to say about it, will never be credited to them. You’ll just end up being another missing person. I don’t see why people take the risk. Is the bite of a vampire THAT damn pleasurable? Anyway, what followed was pure chaos. I don’t think I’ve ever put in so many hours at the job. 911 received so many calls, our lines actually got tied up. People were killing people just because their skin happened to be paler than theirs. It was crazy. And the Supernaturals were having a field day, too. Young vampires took the opportunity to feed in public, thus terrorizing and probably tantalizing the masses.

I will say this; older vampires put a stop to that immediately. It didn’t go on for more than a week. But still, the damage was done and Supernaturals became public enemy number one. I remember Illinois and many other states declaring Marshall Law just to gain some sense of order. It really wasn’t until the Supernaturals came forward with their Council that things started to calm down. I guess it was because people felt that the governments were gaining control again, and with the Council working with them to create new laws that would govern all Supernaturals was the right move. The next step was creating the S.U.I.T. to uphold those laws. That’s when Warren and I decided to join the S.U.I.T.. He wanted to be able to make a difference and save lives. And since we were partners on the force, I wanted to be there by his side and what we were going to be doing was important. So here I am, a S.U.I.T. detective and Warren and I are still partners and best friends… although, I hope we can be something more one day.

"The Guilty Innocent" is the second book in the 'Knights of the Darkness Chronicles'. D.N. Simmons pens his plot totally addicting with vampires, shifters, mystery, action packed with a bit of sexual romance. I was totally engrossed in the story line and I'm hoping there is a third book to this series.

I give "The Guilty Innocent" a 5 star rating.