{Book Review} "We Are the Goldens" by Dana Reinhardt 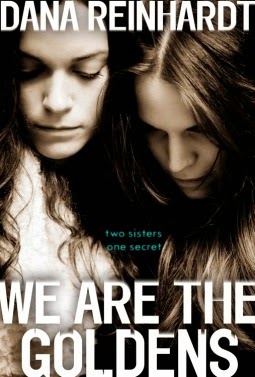 Nell knows a secret about her perfect, beautiful sister Layla. If she tells, it could blow their world apart.

When Nell and Layla were little, Nell used to call them Nellayla. Because to Nell, there was no difference between where she started and her adored big sister ended. They're a unit; divorce made them rely on each other early on, so when one pulls away, what is the other to do? But now, Nell's a freshman in high school and Layla is changing, secretive. And then Nell discovers why. Layla is involved with one of their teachers. And even though Nell tries to support Layla, to understand that she's happy and in love, Nell struggles with her true feelings: it's wrong, and she must do something about it.

Why don't you have a bio section?

Because I hate writing about myself.

But wouldn't that be easier than answering a whole bunch of FAQs?

So where are you from?

I'm from Los Angeles, but now I live in San Francisco. Except for the summers where I go back to Los Angeles in search of the sun.

What are you doing when you aren't writing?

Laundry, usually. Sometimes dishes. And I really like to walk near the Golden Gate Bridge.

Why don't you run instead of walk?

Running is hard. And I'm sort of lazy.

Have you ever had a real job?

Yes. Of course I have. I've waited tables, worked with adolescents in foster care, read the slush pile at a publishing house, and fact checked for a movie magazine. I also worked for FRONTLINE on PBS and Peter Jennings at ABC. I went to law school, which I know doesn't count as a job, but hey, that was a lot of work.

What's your writing day like? Do you stick to a routine?

I like to write in the mornings. Sometimes that means I have to get up really early. I try to write 700 words a day -- about three pages. I know there are lots of writers out there who can write way more than that. I know this because writers like to tell you about how many words they've written on FACEBOOK. So I try not to look at FACEBOOK when I'm writing. And anyway, I've learned that 700 words are about all I'm good for on any given day, and if I write more than that I usually end up getting rid of most of it later.

What, are you lazy or something?

Where do you get your ideas?

From someplace inside my head.

That's not really an answer.

Yes, it is. And it's as honest an answer as I can give.

Are your books autobiographical?

Not really. I'm not adopted, I've never told a lie that sent someone to jail, I've never built a house or had a brother go to war. But there are always things in my books that come from my life or from the lives of the people around me. It would be impossible to make up everything.

Why do you write young adult fiction?

Because I was a young adult when I fell in love with reading and I can remember how books made me feel back then. How they provided both comfort and escape. That might make me sound like a shut-in, but I wasn't. I was just open to the experience books offered, probably more open than I am now as an adult. And I like writing for that sort of audience.

What exactly is young adult fiction?

Lots of people have thought long and hard about this question and have had many intelligent things to say about voice and how YA books can't spend too much time on adult characters, etc. I don't have anything to add to the debate except to say that YA should be a place to go in the bookstore or library if you are looking for a coming of age story, no matter how old you are.

Do you have a favorite book?

To Kill a Mockingbird.

How come there aren't any vampires or wizards in your books?

Hmmmm... good question. Maybe I should write about vampires and wizards.

No, you shouldn't. You wouldn't be very good at that.

Thanks for the vote of confidence.

Did you wear a Soupy Sales sweatshirt when you were seven?

Does anybody even know who Soupy Sales is?

That's what the Internet is for. Don't avoid the question.

I'm sorry, is this really a Frequently Asked Question?

Yes, I did. But I'm trying to portray myself as someone who wasn't a total loser. So maybe you shouldn't bring that up. And it also makes me sound ancient, which I'm not. Yet I had a Soupy Sales sweatshirt. And I loved it. It was yellow. And really soft.

You're right. It does make you sound like a loser. Especially when combined with your earlier answer about escaping into books.

Well, if it helps, I was also a really good athlete. In fact, I was voted athlete of the year in 1983. Not nationally or anything. Just at my school.

No, that's not really helping.

Now you're talking. That's cool. Were you in a band or anything?

No. I gave it up after a few months. But I did play it once in public dressed up in a chicken costume.

You sure? Isn't there anything else you want to know about me?

If I think of anything I can just email you my questions, right?

Right. You can always send me an email to: info@danareinhardt.net

The Author pens "We Are the Goldens", a coming of age young adult novel filled with emotions, secrets and family. I found her characters to be believable and typical for the age of which they were written in. The storyline is actually written through Nell's (younger sister) eyes, after the fact in letter form to Layla. I totally enjoyed the story, but felt there were to many unanswered questions at the end. I'm hoping the Author will be following up with a sequel to answer these questions. Recommended for young adults age 14 and up.

I give "We Are the Goldens" a 4 star rating.