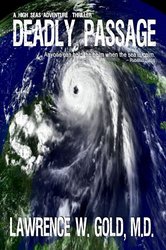 The novel operates on several levels not commonly encountered in a high-octane thriller, including insights into the terrorists, their backgrounds, rationale, and subtle conflicts within the communities from which they have been drawn that ultimately condition their decisions and actions. The responses of US governmental agencies mirror these diverse perspectives.

Andy Reiss, a physician, Jesse his registered-nurse wife, and Rachel, their barely teenage daughter, head home on their sailboat, Prophecy, after five years at sea touring the world. They thought they’d dealt with every imaginable experience at sea. When Prophecy comes upon a sailboat adrift, they discover two young Americans, a brother and his sister. After bringing them aboard, both break out with a rash that Andy identifies as a deadly virus.Soon it becomes clear that they’ve inadvertently rescued two homegrown terrorists intent on bringing a deadly virus to the Miami area.

Soon the disease is full-blown, sealing the fates of the terrorists and all those they encounter.

Andy, Jesse, and Rachel must deal with the unwanted guests, their disease, the Cuban Navy, an approaching hurricane, and the U.S. Coast Guard turning them away from safety, operating under the influence of conflicting political and operational motivations in the Department of Homeland Security, the Coast Guard, and the Oval Office. The shocking and unexpected denouements leave us twisting in uncertain winds reminiscent of On the Beach.

The war in Vietnam interrupted my postgraduate medical training with a year in Colorado Springs and another as a Battalion Surgeon in Vietnam. I spent seven months in the Central Highlands with the 4th Infantry and five months in an evacuation hospital in Long Binh outside Saigon where I ran the emergency room. I returned intact in 1968 to complete my training in internal medicine and diseases of the kidney, nephrology. I worked for twenty-three years in Berkeley, California in a hospital-based practice caring for patients with complicated illnesses often in ICU and served as Chief of Medicine. My wife Dorlis and I retired in October 1995 and sailed under the Golden Gate Bridge for a life at sea in Mexico, Central America, and the Caribbean. Four years later, exhausted from repairing everything on board, (often many times) we sold the sailboat and within a year took the lazy man’s out; we bought a Nordic Tug, a trawler. We motored around Florida, the Bahamas, the entire East Coast and completed two ‘Circle trips’ to Canada and back, eight months, the first time, five months, the second. I wrote professionally as a physician to inform but rarely to entertain, at least not on purpose. My novels include: First, Do No Harm April 2007. No Cure for Murder August 2011, For the Love of God January 2012, Rage 2012, and Tortured Memory 2013. In the last two years, I’ve written three screenplays based on my novels and hope to see one or more produced for the screen. I submitted my screenplay, Rage to the 80th Annual Writer’s Digest contest and won honorable mention (57 out of 11,000). We live in beautiful Grass Valley with 15 year old Mike, a terrier mix and Bennie, a 8year old Yorkie who just looks like he’s on steroids.


Learn more about the Author and his books on:
Website
Blog
Goodreads

The Author pens “Deadly Passage” a gripping, suspenseful , thrilling, page turning novel that shows his extensive knowledge along with research of boats and sailing. With strong believable characters, this is a book I found hard to put down. I highly recommend this book to everyone!

I give “Deadly Passage” a 5 star rating.