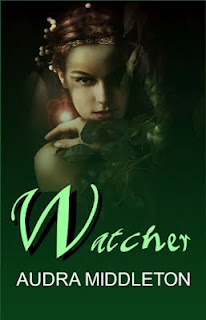 War threatens to destroy the world of Anthelion unless the holy man, Goran, can  solve his prophecy riddle. For every clue he finds, another obstacle surfaces.  An orphan girl, Watcher, becomes his responsibility. As if parenthood itself  isn't daunting enough, she keeps a bear for a pet and transforms into her forest  surroundings to avoid socialization. Hope momentarily emerges when Goran finds  Benaiah, the Chosen Son of the prophecy. Only he soon discovers Benaiah is a  social pariah on the verge of embracing darkness.

When Benaiah and Watcher unexpectedly meet, the two outsiders find in each other a sense of  belonging they've never known. Now their emerging love promises to bring about  the same war Goran is struggling to prevent.

“She blocks her thoughts,” he whispered, surprised.
“Yes. I’ve no idea what goes on in that fool head of hers.”
Ben became flushed with anger. It was rare to find someone he could not read. To have constant knowledge of others’ thoughts was maddening, tedious, and altogether lonely. He had been living in near seclusion on the farm for almost three years, escaping the thoughts of men, resting from the war. He would have appreciated the company of someone he could not read.
“Why have you kept her from me?” he asked, angrily.
Goran laughed.
“You assume I have some sort of influence on that creature. I tried to find a proper home for her in the village throughout her childhood. Every time I tried, she hid in the woods for days. I finally decided God put this kernel in my teeth for a reason. She comes and goes as she pleases, but she has never left Willowbrook Wood until now,” Goran explained.
Benaiah let go of Goran’s arm. Watcher was now several paces ahead, determined to show them she was not crippled by her embarrassing fall.
“I did not give you permission to wear my cloak,” he taunted her, knowing from the flashes of pink he saw as she fell, she had nothing on under.
Watcher glared back at him and walked toward the edge of the woods again. She walked face first into the first tree she came to, dropping the cloak as she became bark, then trunk wood, then bark again on the other side. Watcher called softly to her pet, hoping he did not get hungry and wander off. Having smelled the man in the water, it made him uneasy when she left toward the clearing. He was not far off when she called.
“Thank you, Kitty. Off you go, I’ll be all right for a while,” she whispered, as she grabbed her pack, slipped on her own cloak, and returned to the clearing.
Ben once again stopped in his tracks.
“How did she do that?” he asked.
Goran shrugged. “Her gift.”
“What sort of creature walks through trees?”
Goran shook his head. “I am afraid you are about to find out.”
He thought for a moment about warning Benaiah not to become distracted, not to lose focus of his duties soon to come, but he had grown weary of being the messenger of such foreboding. She would most likely be gone within the week, after all.

About the Author, Audra Middleton:

Audra's love of writing began in the third grade, when she was chosen to go to a young author’s conference based on a story, The Dragon Cookie, which she wrote about a giant cookie that comes to life. She continued writing, and was sometimes asked to write stories for friends as birthday gifts.

Audra went to college thinking she would go into journalism, but opted to go into publishing instead, and even took an internship at Yale University Press. Audra married right after college and was unable to find a publishing job where they were living in Seattle. Audra took an office job. After helping put her husband through law school, Audra went back to school and got her teaching degree. Audra enjoyed teaching, but once her oldest was born, she chose to stay home. At the encouragement of friends Audra started writing again, the result being her first novel, Watcher, releasing January 2013.

Audra and her husband with their three boys, now live in a small town in eastern Washington. They have a black Lab named Benji who eats shoes, gophers and packages left on her front porch (thanks Fed-Ex). When Audra is not chauffeuring and refereeing her children, she writes, dabbles in on-line shopping and plays Texas Hold ‘Em with her friends.

Audra pens "Watcher" in a very well developed plot with strongly developed characters. This was a hard to put down book that had me hooked from the beginning and I totally enjoyed the book. Highly recommended for all fantasy readers.